ABOUT
​THOSE WERE THE DAYS OF MY LIFE 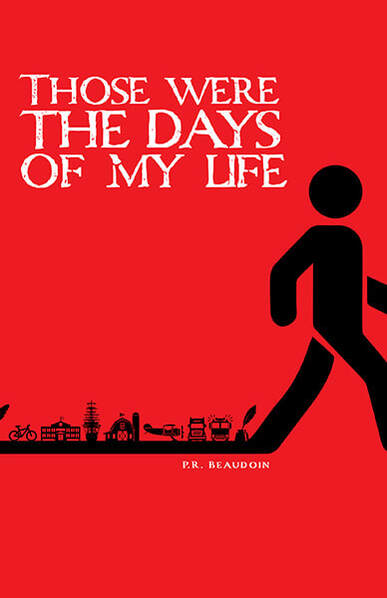 Those Were The Days Of My Life
​is a book that relates stories to the reader, in a thoughtful, humorous and conversational way. The author colourfully communicates his life's adventures from a boy to a pilot, firefighter, father, entrepreneur and more. This book encompasses his life's tales, both good and bad. Some of his stories are not unlike those which you or your friends may have experienced. The author has written this book so as to offer you a different outlook on life. By reading this book, you may find alternative ways to deal with life's journey.

REVIEWS OF
​THOSE WERE THE DAYS OF MY LIFE

A mostly joyous memoir of one Canadian’s life.

Debut author Beaudoin was born in 1958 in Ottawa, Ontario, and in this remembrance, he traces his wandering spirit back to age 4 or 5, when he received a shiny new bicycle. It was “the first tool that allowed me to begin my lifelong adventures,” he writes. During his rambunctious teenage years, he spent time in the Royal Canadian Sea Cadets; he followed this with farm work and a job as an airplane mechanic. In 1975, he met a woman named Kim, and they married in 1980. By this time, Beaudoin had a job in the currency division of the Bank of Canada, repairing machinery. In time, he fulfilled his dream to fly planes, obtaining his single-engine pilot’s license. Later, when he became discontented with his bank work, he quit and became a truck driver. This led to one of his greatest successes—the formation of his own transport company. Still, he kept trying new things: He became a volunteer firefighter; he and Kim opened an internet-provider company; and together with neighbors, they home-schooled their two daughters. Overall, a healthy mix of pride and self-deprecating humor permeates these pages. For example, Beaudoin recounts his shock and fear when his wife enthusiastically accepted his solution for birth control: “I kinda thought when I mentioned the word vasectomy she would stand firm and say no. The answer was a resounding ‘YES.’ ” He also refers often to the lyrics of the 1984 Bryan Adams song “Summer of ’69,” which serves as an organizing structure for the work. He offers breezy, conversational prose throughout, and although it tends to be a glass-half-full narrative, he does offer somber moments as well. For instance, when Beaudoin was 11 and his parents were separated, he once rejected his father’s offer to go for a ride, and a few days later, his dad committed suicide. Fifty years later, he writes, “Sometimes I wonder if I had anything to do with his suicide…I just wonder if it all was too much for him, and my running away may have caused him so much pain…I just wonder…I wonder.”
​
An engaging, quick read from a man who seems to always be up for a new adventure.

Bryan Adams got his first six-string when Beaudoin got his first red bicycle, a toy of emancipation for the frontman and the young boy. Beaudoin takes us through the meanders of his personal and occupational adventures. The book transcends an individual experience into a collective one, that of the Canadian people: with its solidarity instinct to be felt during the 1998 winter ice storm, its entrepreneurship talents: Beaudoin was successively sailor, pilot, farmer, mechanic, bank employee, trucker; its community commitment as a fireman and a home teacher. It also enlightens us as a backdrop on the evolution of the Canadian society during the author's lifespan.
A must read for all those who want to grasp the genuine Canadian spirit.
-From Annick Virot

As evening drew near I sat down to read: "Those were the days of my life" by P.R. Beaudoin. It was a delightful glimpse into his life flowing from childhood to the present. I loved his style. Just when you thought you had heard enough about that topic he was on to the next one. It seemed to suit his inherent desire for the ultimate adventure. His idea of ending most chapters with "But were those the best days of my life?" was intriguing and encouraged the reader to learn more. If you want something entertaining to read, this is definitely the book for you. I loved the fact that although he wrote the book in the first person, he spoke to the reader directly on several occasions thus making them feel part of his life story. He could have gone into more gruesome detail about how he was feeling at the time, but I think it would have detracted from the book's spontaneity. I'd certainly recommend this book to anyone.

I really enjoyed reading your book, what a lovely legacy to leave to you grandchildren.

​An extremely interesting and fascinating read. We can all relate to Mr. Beaudoin's stories. I've had few adventures in my own life that Phil reminded me of. The farm, the sky and trying to stay out of trouble but always seemingly in it. Ya, my pants got warmed a number of times. Oh well, that's what being a kid is all about.

Fun times, serious times, school, dating, falling in love and raising two kids. All while I was going to university three nights a week and teaching full time days. Yep, those were the days.

Thoroughly enjoyed this book. It reminds me that everyone is on a journey and it isn't over until the last chapter is penned.

I thoroughly enjoyed as it was very nostalgic for me growing up in the same era. It was an easy read and you wanted to read on. I liked the comparison to the Bryan Adam's song. I do think there is another book in there. Also, being a neighbour for 30 years, I remember a lot of the antidotes that Phil brought up! Keep writing.

​My Review of Those were the days of my life
Written by PRBEAUDOIN
This book had me in tears for all the right reasons. I hate words like "inspirational" because they've become so overdone, but I just have to say it** this book is "inspirational". I don't think there's anyone who wouldn't benefit from reading this book.
Emily
​​ABOUT
​No Credible Threat
​
The ambitious Russian KGB agent, Uri Eyeski is determined to bring the KGB back to its one-time Glory.
However his plan is bigger, it is a plan to undermine the power and authority of the American political system or institution.
A plan to ultimately overthrow the United States of America through an unwitting American businessman.
Jack O’Neill is a well-respected FBI agent who is assigned initially to investigate a wealthy American businessman for possible hate crimes or money laundering.
During his investigation he suddenly finds himself in a rush to save the American political system from a credible threat to its very foundation.
REVIEWS OF
​No Credible Threat
​Written by PRBEAUDOIN
My Review of No Credible Threat
Good afternoon Phil.
Just wanted to say thank you for the book No Credible Threat. I started reading it Monday and just finished it. I found it a very enjoyable read. I am very humbled that you have such an incredible talent. I'm looking forward to the sequel????? Again thanks and congratulations on the book. Oh I would definitely recommend it and it gets a lot of thumbs up.

Brian Moreau
Phil.
Just wanted to say thank you so much for your book "No Credible Threat". I started reading it Monday morning and and finished it Monday night. I found it a very entertaining read. You have such a fantastic talent for hidden sarcasm. I'm looking forward to the sequel you mentioned. Again thanks and congratulations on the book. Oh I would definitely recommend it to anyone that believes in supporting Indi writers.